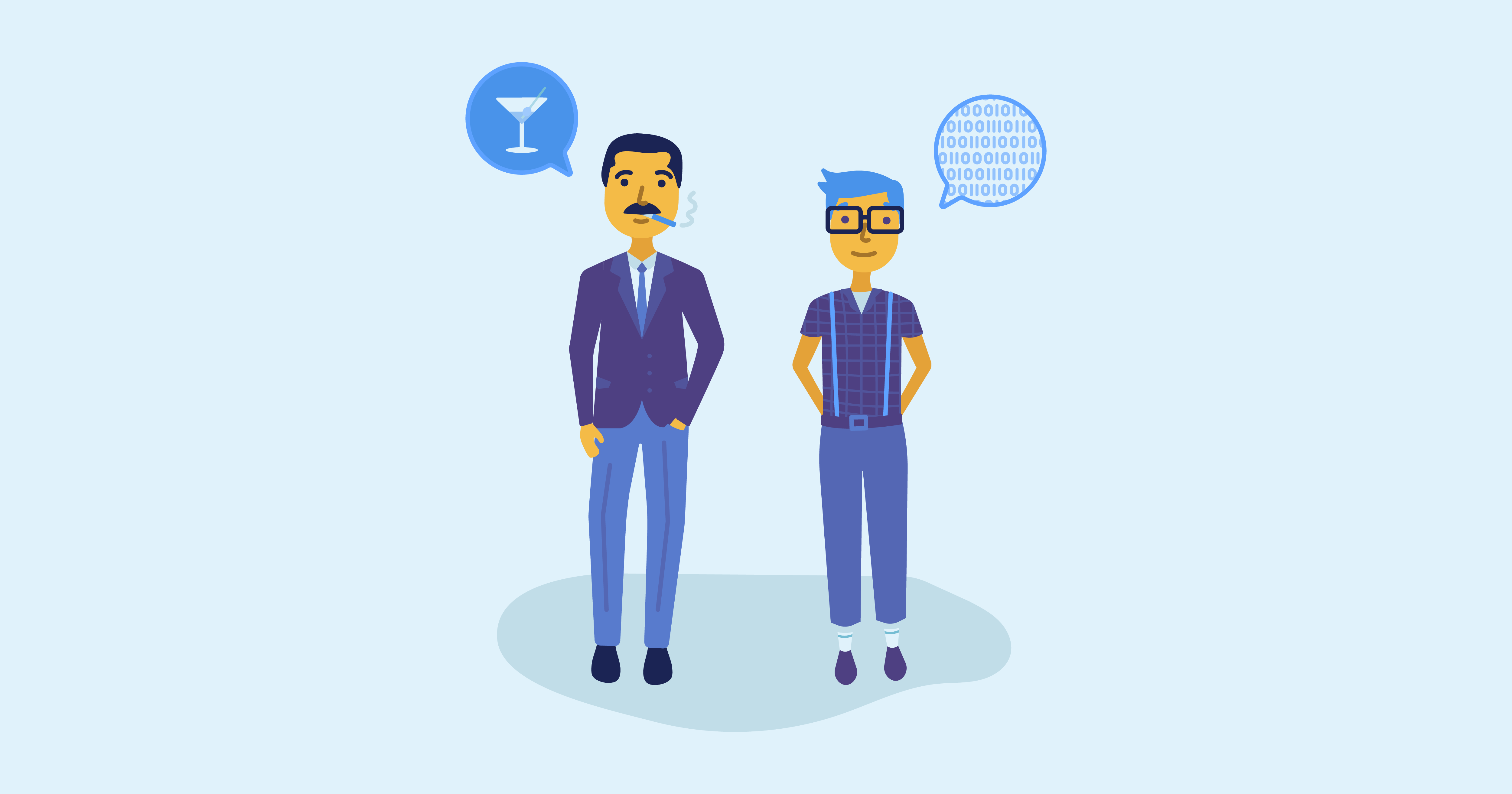 Ad tech is an insanely convoluted industry, dogged by gobbledygook.

In the second of a continuing series, we attempt to explain ad tech in terms even a ten year-old would understand.

Last time around, we told the story of how ad tech came about. There were ad networks – in fact, middlemen of all kinds. And Scrooge McDuck was also there for some reason.

This time, we’re talking about a mysterious secret language. Not many people know this, but we can actually trace Adtechish’s roots back in two directions:

Why the need to create a new language in the first place? For Madman, it made the case for adding a few extra zeros to that fee. While for Mathman, the fact you had to ask tells it all. Your lack of technical understanding just added even more extra zeros.

Three letter acronyms or abbreviations are maybe the best example of where Mathman meets Madman in the Adtechish tongue. These TLAs are where the techie finds abstract, robotic terms no regular human would ever even think of. Then the Don Draper adds a bit of copy sparkleô – making each term an ad in itself. Who wouldn’t enjoy a refreshing, ice cool glass of RTB, or a juicy PMP burger? Incidentally, TLAs are also very popular in the world of self-help books – make your own assumptions.

Next, we’ll go into some of the ad tech tongue’s most commonly used terms. All from the point of view of a publisher, and the growing number of Adtechish options at their disposal through time.

Last time round we explained how real-time bidding (RTB) came about. As we showed, it allowed buyers to cherry pick ads based on who was viewing them. And this was the start of a bigger trend - advertising becoming more about audience chasing than positioning alongside the best content.

As Star Wars parts I, II and III taught us though, even the most trustworthy space vehicles can still crash and burn. And RTB’s own Jar-Jars came in the shape of fraud, data leakage and most of all, our old friend arbitrage.

In other words, the publishers weren’t quite finished yet. And some brands and agencies still saw value in their ads appearing next to the New York Times over say catgifs.com. Even if catgifs.com was a heck of a lot cheaper. And cuter.

So from RTB (also called OMP or open marketplace), came PMP (or private marketplace). A PMP was a deal between a particular buyer and a seller, just like in the old Mad Men days. But this time without all the paperwork and Martinis. OK, without the paperwork.

The good thing about RTB though, at least for the agencies doing the buying, was the data element. The fact they could aim their ads at people who were more likely to buy their product. And hey presto, pretty soon through PMPs you could do the same - targeting to your heart’s content.

So these uber-PMPs packaged together ad space and formats, as well as audience data. You could buy spots on the New York Times homepage, but only in front of readers who were moving house or thinking of buying a car.

But wait. Just to make things even more confusing, there were different types of data buyers used to make that ad magically appear only to the right people.

They were called 1st, 2nd and 3rd party data, though it was unclear where the party was, or who was invited:

For some publishers, 3rd party data was the point where this all looked like it might be one step forward and two backwards. It meant buyers could just go elsewhere to find data on publishers’ own or similar audiences.

But on the plus side, and as so often in this sector, market forces made it so 3rd party data caused its own downfall. And soon, like a hall of mirrors, brands were working with even more 3rd parties to double-check that 3rd party data was actually what it said on the label.

With the lack of trust in the open marketplace, and in many cases third party data, PMPs stood the test of time pretty well. In fact, even looking forward for the next few years, the majority of ad spend will be private.

But the major drawback of both PMP and OMP was also its original USP – the fact it was all so super-fast, and in the moment.

In the old Madmen, pre-Mathmen world, ad campaigns would be booked over a specific period of time, with regular, guaranteed numbers of ads bought within that period.

Hence the emergence of automated guaranteed, programmatic guaranteed and automated direct. These were all Adtechish words for new systems that would enable just that – measured delivery, through shiny RTB pipes.

So, automated guaranteed would have been the next logical step. Automating the last part of the advertising pie not currently under the control of ad tech – what could possibly go wrong? The answer is, we never really got to find out. And once again, likely it was down to data. Publishers were understandably nervous, what could happen if their ‘direct’ or guaranteed audience could be cherry picked, just as buyers had done with RTB. And for data-driven buyers, what was the value of those audiences without targeting?

Instead of what looked the logical, long-term next step then, the ad world shifted towards short-term dollars.

Header Bidding – of all things in the Adtechish dictionary, here’s the one that makes all the horribly complicated things before it look like a relaxing park walk.

Remember when we talked about all the middlemen working in between the publishers on the one side, and the brands and agencies on the other? Before, if you worked with one of them to sell your ad space, that was that. But with header bidding, you’d work with a whole bunch of them at the same time – all competing together in real-time. What could possibly go wrong?

At this point, many peoples’ brains just overheated, and they had to have a little lie down. Even those fluent in Adtechish.

Others maintained that header bidding was good for everyone. Well, maybe not for the brands, who now had the same sites and content coming at them in all directions. But everyone other than them.

Imagine selling an old phone online to the highest bidder. Then imagine that auction hooked into five other auctions, with more people bidding on each one. Header bidding meant more money for publishers. Even if it did also threaten more headaches – from slower page loading, to data leakage risks.

The Adtechish name ‘header bidding’ came how it all actually worked - the code and bidding process taking place right there, in the HTML header section of the browser page. This was always a bit of a hack. Hence the problems listed above. And also why ultimately, everyone agreed that moving the process from the browser (client-side) needed to move back to where it belonged, in the server (aka server-to-server header bidding.)

Of course, that’s where it should have gone. But once again, our old pal data saw to that one. It turned out, with server-to-server, you couldn’t always target people as well. So many people just carried on as they were, their heads in the browser.

So, there you have it – these acronyms make up the ancient language of the Adtechs. Armed with these abbreviations, you can now go out and mystify everyone.

So go forth and spread the Adtechish lingo. Don Draper would be proud.